Instinct and Drive in Darwin and Freud; Contemporary Psychoanalysi ... 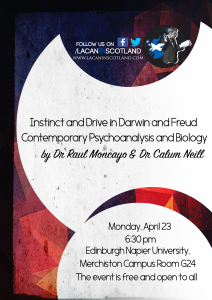 Where Darwin’s theory of natural selection lacked an adequate account of inheritance, advances in the biological understanding of genetics have resulted in evolutionary theories now taking a central place within the biological sciences. Studies of natural selection that use DNA sequence data are now answering questions first posed by Darwin in the 19th century.  The danger, however, of performing a straightforward synthesis of Darwinian ideas and genetics is the risk it introduces of reducing the social sciences and the humanities to biological and physical phenomena. When this reduction is enacted, controversial and primitive views begin to emerge about gender, sex, race, and culture. In this talk Dr Raul Moncayo will argue that it is precisely psychoanalysis that needs to be used by the social sciences and the humanities to understand culture in symbolic terms that cannot be reduced to biology and yet can interact productively with the biological notions of instinct and inheritance and all they suggest.

Dr Moncayo’s talk will be preceded by an introductory talk by Dr Calum Neill which will seek to provide a framework to understand the pertinent psychoanalytic theory.

Dr Raul Moncayo is a practicing psychoanalyst and founding member of the San Francisco Bay Area Lacanian School of Psychoanalysis (LSP). He is author of nine books on Lacanian theory. His most recent book, Knowing, Not-Knowing, and Jouissance: Levels, Symbols, and Codes of Experience in Psychoanalysis will shortly be published as part of the Palgrave Lacan Series.

Dr Calum Neill is Associate Professor of Psychoanalysis and Cultural Theory at Edinburgh Napier University, Editor of the Palgrave Lacan Series and Director of Lacan in Scotland. His book Jacques Lacan: The Basics will soon be published by Routledge.