Racialization and the Sexuated Lacanian Subject 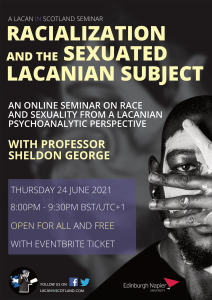 Jacques Lacan rarely discussed race, but his work on sexuality allows us to theorize racialization. Though not completely synonymous in their operations, race and sexuality function—at the specific level of the signifier—to channel libido and limit subjective identity.

Lacan’s bathroom diagram in Instance of the Letter presents sexuality as bound to an amorphous libidinal underflow that is granted meaning through the dominating signifiers over each door, “Ladies” and “Gentlemen.” It allows us to understand libido as the source of what Lacan would later call a headless subjectivity, suggesting a subject of jouissance who stands in opposition to the subject of the signifier, or Lacan’s subject of desire.

Alienated from a libido, or sex, that remains in the Lacanian Real, the subject of the signifier, Professor Sheldon George suggests, negotiates sexual and racial identity as part of the mimicry in which the ego emerges as a screen or shield against lack. Where sexuality stands as an unconscious choice, race is assigned by the Symbolic to structure the ego (defined as an Imaginary self-image) and color-code the body. Situating skin color at the intersection of sexuality and race, racialization both inscribes the body through the signifiers of the Symbolic and conditions a libidinal search for race as the sexual, phallic object that the drive latches onto in its circuitous progressions. This object of race alienates the subject of jouissance, expressing this subject only through curtailed partial drives that emerge with the dominance of the signifier.

The racial-sexual subject of the signifier must be situated on the left side of Lacan’s graph of sexuation, as the subject for whom all jouissance is both phallic and mediated by objects a such as race. Defined by putative proximity to the phallus, this racial subject can be fantasized as having the a, or even as accessing an “other jouissance” of absolute pleasure that elicits our jealouissance. But positioned on the right side of the graph is a subject who experiences a jouissance, or accesses a libido, that cannot be spoken of, a headless subject. It is this subject of jouissance, singular and unique in the view of psychoanalytic theory, that is alienated by racialization.

The seminar will take place on Zoom at 8pm-9:30pm British Summer Time (BST)/GMT+1/UTC+1 on Thursday 24 June 2021. Please be aware that Eventbrite and Facebook MIGHT automatically convert the event time for the time zone in which you reside.

All welcome and free with registration on Eventbrite. The zoom link will be available for registrants on the Eventbrite event page on the day of the seminar.

Professor Sheldon George is Professor of English and a scholar of American and African American literature at Simmons University in Boston, Massachusetts. His scholarship centres most directly on Lacanian psychoanalytic theory and applies cultural and literary theory to analyses of American and African-American literature and culture. He is the author of ‘Trauma and Race: A Lacanian Study of African American Racial Identity’ , coeditor, with Jean Wyatt, of Reading Contemporary Black British and African American Women Writers: Race, Ethics, Narrative Form, and coeditor, with Derek Hook, of Lacan and Race: Racism, Identity and Psychoanalytic Theory (Routledge 2021).