An online seminar exploring Lacan’s essay ‘The Function and Field of Speech and Language in Psychoanalysis’, by Dr Derek Hook 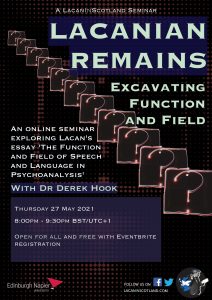 In 1953 Jacques Lacan buried a time capsule. Just months before the formal beginning of his annual seminar, on the eve of his trip to the Eternal City, where, on the 26th of September, he would deliver a broadside aimed at the prevailing orthodoxies within the international psychoanalytic community, Lacan completed the landmark The Function and Field of Language and Speech in Psychoanalysis. While several concepts from that paper have entered the lexicon of everyday Lacanian discourse – the notions of full and empty speech, the idea of the ‘trans-individual’ unconscious, etc. — there is much that remains recalcitrant and untimely, much, in short, that is in need of further excavation.

Two features of this écrit are particularly worth noting as we delve into its more obscure regions. Firstly, the unusual conceptual pairings that Lacan uses to drive his theorization (not just Hegel with Freud, but Pascal as reader of Logical Time, Kierkegaard’s repetition juxtaposed against Plato’s eternal essences, etc.). Secondly, the degree to which this écrit enacts the anticipatory temporality it formulates: an impressive number of later Lacanian theorizations – the recourse to topology, the intersection of death-drive and desire – can be found, in germinal form, within its pages. The aim of Dr Derek Hook’s excavations is to make a series of the more oblique or underdeveloped concepts with Function & Field accessible to both theorists and clinicians. More simply put: he ask 10 questions so as to unlock a number of frequently under-exposed but nonetheless vital Lacanian concepts:

1. In what ways does it benefit us to understand – with thanks to Lévi-Strauss – the unconscious as a stomach?

2. What does Pascal have to tell us about the prisoner’s dilemma?

3. What is the ‘zero-symbol’ (Marcel’s ‘mana’) and how does it inform Lacan’s later theorizing?

4. What do the “kou mantics” of China (Chinese characters) have to tell us about ‘signifierness’?

5. Why is Law an integral and inbuilt aspect of the order of language?

6. How does the topological figure of the torus enable Lacan to think the “before” of language and the relation between desire and death (drive)?

7. Why, pace Goethe, is the Word always ontologically prior?

9. What are primary and secondary historization and how do they relate to full and empty speech?

10. What is “the twofold moment of the symbolic” and why is this essential to understanding psychoanalysis as a conjectural science?

Suggested (although in no way necessary) reading: Jacques Lacan’s “The Function and Field of Speech and Language in Psychoanalysis”, or Paul Verhaeghe’s accessible commentary on it which is available here.

The seminar will take place on Zoom Thursday 27 May at 8pm-9:30pm British Summer Time (BST)/GMT+1/UTC+1. Please be aware that Facebook and Eventbrite automatically MIGHT convert the event time for the time zone in which you reside.

All welcome and free with registration via Eventbrite. The zoom link will be available for registrants on the Eventbrite event page on the day of the seminar.

Dr Derek Hook is a scholar and a practitioner of psychoanalysis who specialises in Lacanian psychoanalysis, post-colonial theory (the work of Frantz Fanon in particular), and the psychology of racism and critical social psychology. He is the co-editor of the Palgrave Lacan Series, the 3-volume series Reading Lacan’s Écrits (Routledge), and author of Six Moments in Lacan (2017), most recently.