Join us for an online seminar where Dr Lorenzo Chiesa discusses religion from a Freudian and Lacanian perspective. 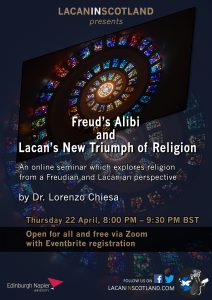 Up until the early 1960s, Lacan almost unreservedly supports Freud’s critique of religion, which the latter sees as a human illusion due at bottom to our species-specific natural helplessness. Less than ten years later, Lacan vehemently condemns Freud for “promoting the One” and thus falling back into the very “sermonizing” he abhorred. In this seminar, Dr Lorenzo Chiesa aims at exploring the reasons for such a seemingly drastic change in Lacan’s orientation. Why does Freudianism not suffice for atheism? In what sense is religion “invincible” even and especially after the death of God? How can psychoanalysis resist religion only by “getting used to the real-real”? What is the role of science in this?

Suggested reading: Freud’s “The Future of an Illusion”. However, please note it is not necessary to have read this beforehand.

All welcome and free with registration via Eventbrite. Registrants will be sent a zoom link shortly before the seminar begins.

Dr Lorenzo Chiesa is a Lecturer in Philosophy at Newcastle University (UK), where he is the Co-Convenor of the Faculty Research Group in Critical Theory and Practice. He is also a visiting professor at the socio-political philosophy programme of the European University at St Petersburg, and author of books “The Not-Two: Logic and God in Lacan” (The MIT Press, 2016), “Subjectivity and Otherness” (MIT Press, 2007) and “The Virtual Point of Freedom: Essays on Politics, Aesthetics, and Religion” (Northwestern University Press, 2016).