IN SOLIDARITY WITH COLLEAGUES STRIKING AT THE UNIVERSITY OF EDINBURGH, THIS EVENT HAS BEEN CANCELLED. 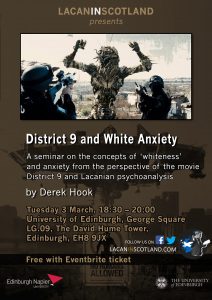 There has been much talk of late regards the notion of ‘white fragility’. ‘Whiteness’ being seen here as something akin to a defensive – and typically racist – formation of privilege. These issues can be differently approached by taking a Lacanian standpoint on anxiety (as opposed to ‘fragility’), and by utilizing examples drawn from the popular culture of post-apartheid South Africa, most instructively, the trend of dystopian science fiction best exemplified by District 9.

In this talk, Dr. Derek Hook will give a brief overview of Lacan’s theorization of anxiety in Seminar X, before exploring its usefulness in thinking the political and subjective occurrence of ‘white anxiety’. Science fiction becomes a particularly suggestive medium regards an exploration of themes such as the ‘end of whiteness’ and ‘white extinction’, themes routinely mobilized by the far right. Likewise suggestive here is Lacan’s well-known illustrative device for anxiety (the masked subject confronting the towering figure of a prey mantis). This illustration not only helps us explore further the dimensions of anxiety (in its ‘real’, subjective, symbolic and fantasy forms), but causes us – as does the Kafkaesque transformation we witness in District 9 – to consider how the white subject might persist beyond ‘the end of whiteness’.