Fatigue as Resistance to the Ideologies of Late Capitalism

An event exploring fatigue in modern society from a psychoanalytic perspective 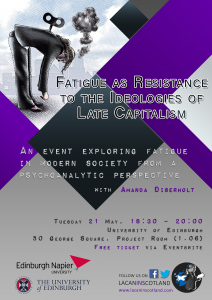 Contemporary society — dominated by the ideologies and practices of late capitalism and science — is characterised by a demand for constant flow and for everything to be monitored, known, and visible. People are increasingly reduced to numbers and objects of productivity. Thus, not unsurprisingly, we are witnessing a rise in different afflictions — fatigue being especially prominent (diagnosed as Chronic Fatigue Syndrome/Myalgic Encephalomyelitis). Using psychoanalysis, how can we better understand the current socio-cultural and political climate and how it contributes to conditions such as fatigue? Drawing on popular culture and interviews conducted with those who suffer from fatigue, Amanda Diserholt will in this talk explore the manifestation and place of the phenomenon in today’s society, and how it might be used as resistance to the demand for constant activity and presence. The talk will turn around Lacan’s notions of the drive and desire, particularly as elaborated in relation to the structure of anorexia (as a refusal of an activity and embodiment of a disappearance), and mourning. This will also help us explore whether or not fatigue constitutes a ‘successful’ resistance, and what other individual and cultural factors might play a role in its emergence.

Amanda Diserholt is a PhD candidate at Edinburgh Napier University at the School of Applied Sciences. Her research looks at the symptomatology of fatigue from a Lacanian psychoanalytic perspective.

The seminar will be chaired by Dr Katharine Swarbrick, Lecturer in French and Francophone Studies in the School of Literatures, Languages and Cultures (LLC). Katharine began her research career by writing on Lacanian perspectives on the psychopathology of Jean-Jacques Rousseau. Her exploration into interrelations between psychoanalytic theory and aspects of Enlightenment has extended into the life and works of Jean-François Marmontel and, more recently, Voltaire.

The seminar is free and open to everyone. Seats should be reserved through Eventbrite